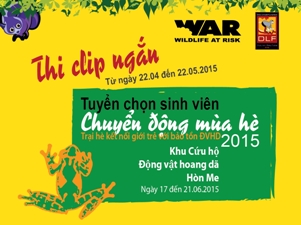 Wildlife Summer Camp 2015 aims to connect youth to wildlife conservation through helping them identify suitable jobs and to inspire them to take actions to protect wildlife both now and for the future. With the theme “Scattering of love”,the Camp will last for five days and four nights at WAR’s Hon Me Wildlife Rescue Station. A wide range of practical and interactive activities will be conducted in an exciting and creative manner, including daily rescue activities such as preparing food and feeding wildlife, cleaning wildlife enclosures, growing food plants for rescued wildlife and forest trees at the Station, paint wildlife’s enclosure, communication activities. The campers will also learn different skills related to the profession such as photography, camera trap setting up, forest surveying and other recreational activities!

In order to find suitable students for the Wildlife Summer Camp 2015, a contest on creating short video clip was launched by WAR and the DLF. In this contest the contestant has to create a short video clip that is not longer than three minutes to call for the youth to take part in wildlife conservation. Any university students from Ho Chi Minh City and Hanoi is eligible. The contest lasts from 22 April to 22 May 2015 with the winners of the contest participating in the Wildlife Summer Camp 2015.

“WAR’s Wildlife Summer Camp isa truly meaningful experience. I took part in many practical activities and was passionated for the friendships those were bonded during the trip. I knew moved stories of rescued wildlife and experienced how careful they were taken care of by WAR’s staff. I commit myselves to contributing more to wildlife conservation though asking people around to take part in wildlife protection. The wildlife were so unique and beautiful and I wish my children would also see them the way I saw.” – expressed Miss Le Thi My Nhung from Agriculture and Forestry University, participated in the Wildlife Summer Camp 2014.