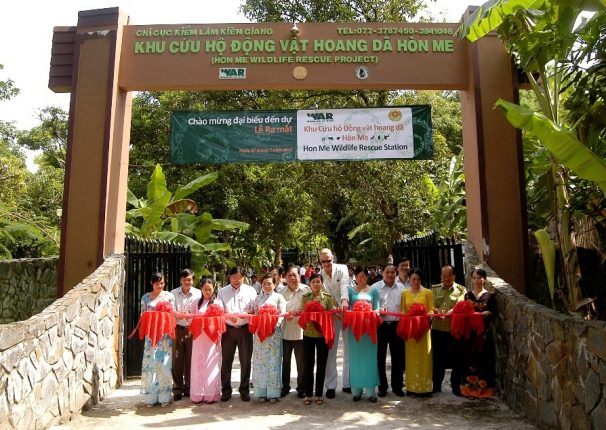 Cutting the inauguration ribbon at the ceremony

Hon Me WRS is one of three rescue stations managed by WAR including Cu Chi WRS, Cat Tien Bear and Wild Cat Rescue Station and Hon Me WRS. Hon Me WRS was established according to the project entitled “Construction of Bear Rescue Station” implemented by WAR, Free the Bear and Brigitte Bardot Foundation during the period of 2008-2010. Since January 2011, the Station was officially named “Hon Me WRS” that was directly managed by WAR in collaboration with Kien Giang provincial FPD.

Currently, more than 50 individuals of 15 endangered species are being rescued at Hon Me WRS including Moon Bear (Ursus thibetanus), Sun Bear (Ursus malayanus), Yellow-checked Crested Gibbons (Nomascus gabriellae), Pygmy Loris (Nycticebus pygmaeus), Giant Asian Pond Turtle (Heosemis grandis) and Elongated tortoises (Indotestudo elongata). Most recently on July 13th, the Station received a Leopard Cat (Prionailurus bengalensis) for the first time, from a local people who voluntarily handed it. In the coming time, this station is going to rescue other species such as snakes, turtles, and small carnivores.

“The infrastructure improvement of Hon Me WRS so that it is able to rescue different wildlife species is one effort of WAR to protect endangered wildlife from extinction. The strong supports and cooperation of related bodies are fundamental for the operation of Hon Me WRS. We believe that with this cooperation, more and more wildlife will be successfully rescued in the coming time.” – said Mr. Dominic Scriven, WAR’s Trustee.

WAR is grateful for valuable supports from individuals and organisations in saving Vietnam’s unique wildlife.