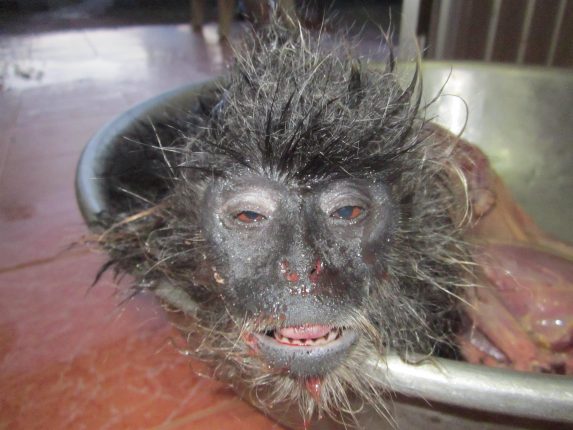 The People’s Court of Phu Quoc District, Kien Giang Province has just punished by terms of imprisonment the four killers of the Indochinese Silvered Langur on Phu Quoc Island. According to this sentence, each indictee is going to be imprisoned from two to two and a half year.  At 8.30AM on 30 July 2013, Vo Van Thong born in 1976, Nguyen Minh Ha born in 1978, Duong Cong Luc, born in 1977 and Huynh Huu Loc born in 1979 (all resided on Phu Quoc Island, Kien Giang Province) went into the strictly protection forest of Phu Quoc National Park to hunt wildlife for meat. Two individuals of Indochinese Silvered Langur were shot, killed and partly eaten. While killing the third individual, the four were caught in action by the Park’s rangers. Proofs were included three bodies of Indochinese Silvered Langurs those are partly eaten, one sport gun, three knives, one hammer and two motorbikes.

On 6th September 2013, all four indictees were arrested and imprisoned for judging court. The three bodies of the Indochinese Silvered Langur were identified and confirmed by Wildlife At Risk (WAR) and The Institute of Ecological and Biological Resources, Hanoi, specimen is maintained by WAR.

On 20 January 2014, the People’s Court of Phu Quoc District, Kien Giang Province accused the four indictees of violating government regulations on endangered wildlife management. Accordingly, the Court sentenced Vo Van Thong and Nguyen Minh Ha two years and six months of imprisonment, and Duong Cong Luc and Huynh Huu Loc two years of imprisonment.  The specimen is decided to be buried. Silvered Langur is an endangered species that is native to Kien Giang Province. The species is listed in IUCN Red Book and is categorized as vulnerable species (VU level) in Vietnamese Red Book. The Silvered Langur is listed in the IB animal group under Decree 32/2006 NĐ-CP of the government on endangered wildlife management.

Ms. Do Thi Thanh Huyen, WAR’s Wildlife Education Manager expressed that: “The sentence is not the highest of its frame. But it is strict enough to be a lesson for anyone who is intent or is hunting, transporting and consuming endangered wildlife. We highly appreciate those enforcement efforts of Phu Quoc District, Kien Giang Province. We also expect that more local people will take actions in wildlife protection”. Please see more news about this case here, and some photos of the Indochinese Silvered Langur here.