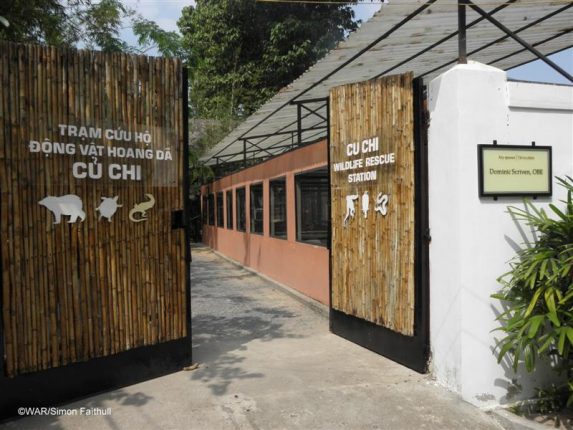 The Cu Chi Wildlife Rescue Station rescues animals that are confiscated from the illegal animal trade in Ho Chi Minh City or other surrounded provinces. This is the fist multi-species rescue station in the South of Vietnam that can takes of many endangered wild species. After the animals have recovered and have been rehabilitated, they are returned back to the wild.

From 2007 till the present, the station has rescued over 5500 individuals of many endangered species. Among those, over 5000 individuals have been released back to the wild.

Raising public awareness of the protection of wildlife is one important purpose of the station. The display center is equipped with visual images, objects, samples and information in a lively way to help the visitors understand about illegal wildlife trade and and hunting as well as what they can do to protect the biodiversity of Vietnam.

With an experienced and enthusiastic staff, the Cu Chi Wildlife Rescue Station is trying its best to overcome the limitation of narrow area in order to rescue more and more wildlife. We are highly appreciative of your support.

Since The 1st of December 2015, WAR handed over the rescue center to Forest Protection Department (FPD) of Ho Chi Minh city to follow up all activities. Please contact FPD HCM at: (08) 38552501 for further information.

At the Cu Chi Wildlife Rescue Station, you will not only see the endangered animals, but also learn stories and special features of different individuals. You can also visit the display centers to find out what you can do to help. You can also join us in feeding the animals or preparing food for them.

How do you get to the Cu Chi Wildlife Rescue Station?