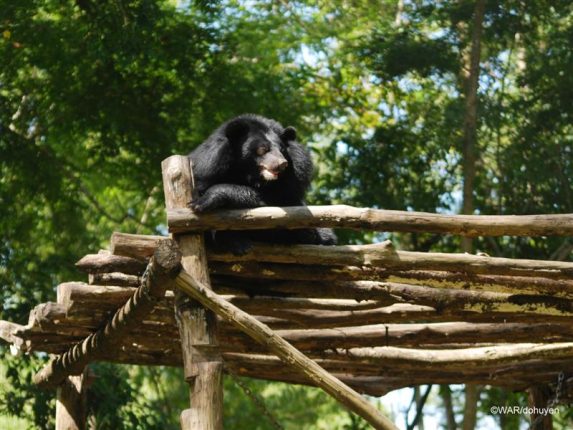 The Cat Tien and Wild Cat Rescue Station contains both quarantine and training dens and also a 1ha semi-natural enclosure for our bears. Both species of bears (sun bears and moon bears) along with wildcats are rescued, rehabilitated and released into the semi-natural forest habitat that helps further rehabilitation and help develop their wild instincts.

The wildcat rescue station is also home to a “critically endangered” Asian Leopard that was being kept as a pet illegally by a local family in the Mekong Delta town of Vinh Long. Staff from the Cu Chi Wildlife Rescue Station (CCWRS) and Forest Protection Department (FPD) rescued and transferred to this unique facility where she is enjoying her comfortable natural surroundings.
The project was set up in partnership between Wildlife At Risk (WAR), Free The Bears Fund (FTB) and Cat Tien National Park during the period of 2008 – 2010.

The project is now open to the public and aims to raise awareness, educate and for the public to have the chance to see some Vietnams’ unique wildlife in semi-natural environments.

How do you get to the Cat Tien Bear and Wildcat Rescue Station?
By car
From Ho Chi Minh City, you go along National Road 20 to Tan Phu District (Tai Lai three-way crossroad), turn left to Kilometer No.13 and turn right to Nam Cat Tien Commune.

By bus
1 bus per day leaving at what times – public will be annoyed turning up at Mien Dong at 9am finding the bus had left at 6:30am.

How can you help the Bear and Wildcat Rescue Station?
Some activities you can do to support the station are: