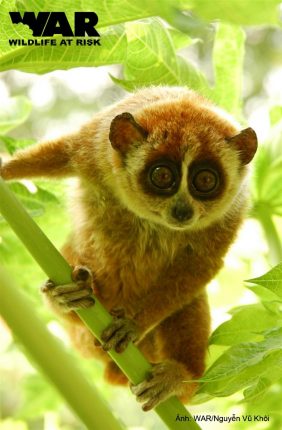 Approximately 40 photos, mostly sized 30X45cm will be displayed at the Restaurant and Beach Bar of Mango Bay Resort. Those photos were taken by seven WAR’s staff who are deeply in love with each individual of endangered wildlife. The photos could be shot during the rehabilitating or releasing of wildlife in a natural setting, which make the audience feel the freedom lives of those wildlife in its habitats. The photos are not only artistic but also show the real beauty of each endangered wildlife such as Asian Leopard, Yellow-cheeked Crested Gibbon, Moon Bear, Green Peafowl, Pangolin, Loris, Hawskbill and Common Pheasant. Highlight of the exhibition is endangered wildlife those could be found on natural forests of Phu Quoc Island.

Each displayed photo include a different story about the endangered wildlife and WAR’s related rescuing activities. All of those wildlife were victims of illegal poaching, trading or consumption and they all were lucky enough to be rescued by WAR. Most of them are now living freedomly in the forest where they were released while some are enjoying comfortable lives at WAR’s rescue facilities including Cu Chi Wildlife Rescue Station, Ho Chi Minh City and Hon Me Wildlife Rescue Staiton, Kien Giang Province.

“It’s barely possible to see those endangered wildlife in the wild. We are also lucky to not only see those wildlife but help them to be freed. Each photo is our memories related to the whole process of rescuing that individual such as healthcare, feeding, rehabilitating, and/or releasing. I hope that the audience will not only enjoy the beauty of endangered wildlife but also understand out efforts in wildlife protection. I also hope that each audience will support us so that we can save more endangered wildlife” – Said Mr. Nguyen Vu Khoi – WAR’s CEO who contribute most photos at the exhibition.

The exhibition will be opened for every local people and tourist of Phu Quoc Island from 9AM to 7PM. Entrance is free. There will be available photos for you to purchase. All fund raised during this exhibition will be returned to WAR’s rescuing activities.

According to Mr. Ronan Le Bihan, Manager of Mango Bay Resort: “The photo exhibition is one of our efforts to contribute to the nature of Vietnam. We did support WAR in many other conservation activities and we hope to spread the conservation message in a relax manner to our visistors while they spend the holidays here with us.”