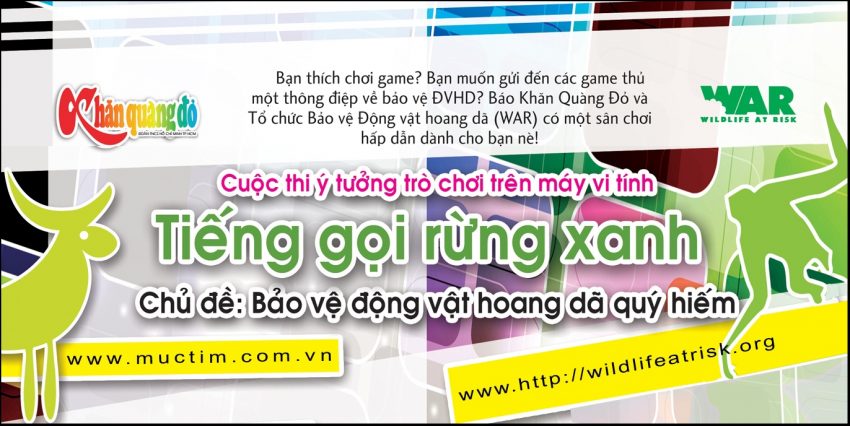 Ho Chi Minh City, September 2012 – Wildlife At Risk (WAR) cooperated with Khan Quang Do magazine, to launch a competition that submitting the ideas for wildlife computer games titled “Call of the forest” for all children aged 11 to 15 years old, throughout Vietnam, from 5th September to 30th November 2012. This contest is part of the programme titled “Take part in Nature Protection year 2012”, implemented by WAR and Khan Quang Do magazine.Focusing on “Saving Vietnam’s endangered wildlife”, the competition gave students the opportunity to satisfy their creativity, by highlighting the beauty and value of

Vietnams’wildlife as well as the threats to wildlife and the important messages calling for action, to help protect endangered species. This competition also gave children a healthy and attractive playground that fits the learning needs and the computer usages today. Mrs. Do Thi Thanh Huyen, Wildlife Education Manager –WAR, commented: “The best game ideas may be considered for completion before being loaded on WAR’s website. We hope this will help raise awareness amongst young children and the public that highlights the importance of wildlife protection. Through these games, everyone can see the beauty of Vietnam’s wildlife, but also learn about threats to these unique species. We hope that these games will encourage people to help WAR save endangered species and save them from possible extinction.” The award ceremony will be organised as part of the program, “Take part in Nature Protection year 2012” at the end of December, 2012. Also, the 50 best drawing paintings that were part of the drawing contest about, conservation of the Javan Rhino and other endangered species, implemented by WAR and Khan Quang Do magazine in 2001, will also be displayed at the ceremony. Contest regulations, and information about Javan Rhino’s and other endangered species will be published in Khan Quang Do magazine once the competition has started. You can download the contest regulations here or at www.muctim.com.vn