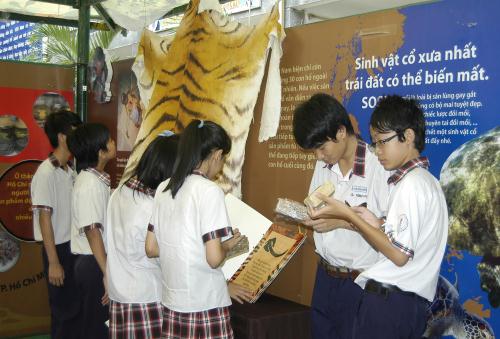 Ho Chi Minh City, 7th May, 2012 – By the end of this school year 2011-2012,more than 15,000 students aged 12-15 years old and teachers from 36 secondary schools in Ho Chi Minh City have participated in the SOS traveling exhibition since it was launched in December 2011. Leaving the exhibition, students and teachers were totally committed to “Say no illegal wildlife products” and promised to help Vietnams’ endangered wildlife.

The SOS Travelling Exhibition was conducted by Wildlife At Risk (WAR) with strong support from the Ho Chi Minh City Department of Education and Training and the Ho Chi Minh City Forest Protection Department. The SOS exhibition is an initiative of WAR, to educate and urge the younger generation of Vietnam to save wildlife from the brink of extinction such as the Javan Rhino. Visiting the SOS Travelling Exhibition, students are taught all about the illegal wildlife consumption throughout Vietnam. The students are able to watch interesting video clips about wildlife product consumption, touch and interact with the exhibits, listen to endangered wildlife sounds, and participate in exciting games to win gifts from WAR.

The students and teachers were quite excited when participating at the exhibition. Previously, most students and citizens thought that illegal hunting is the most dangerous threat to wildlife. However, after visiting the exhibition, many children have realized that illegal wildlife product consumption is the most dangerous threat to Vietnam’s wildlife. Many students were moved when interacting with exhibits on how endangered animals were consumed and are now being pushed towards the brink of extinction. On the consolidation of the SOS Travelling Exhibition of school year 2011-2012, a two-day study tour to Cat Tien National Park was organised for more than 20 university volunteers who successfully completed their tasks of guiding students at the exhibition. During this study tour, the volunteers had the opportunity to explore the jungle where the Javan Rhino used to live. The trip helped the volunteers to understand more about forest values. It also makes them appreciated the wonderful wildlife and more regretful for the extinction of the Javan Rhino. The knowledge and experience earned during the trip will help the volunteers to be more confident in guiding students at the SOS Travelling Exhibition in the future.

“The SOS Travelling Exhibition has raised the awareness and knowledge on the illegal wildlife production consumption for both students and teachers. We hope that not only secondary school students but also the public will act in saving Vietnam’s endangered wildlife by saying NO to illegal wildlife products”, saidMrs. Huyen Do Thi Thanh, Wildlife Education Manager – WAR. The SOS Travelling Exhibition was successfully operated in four districts in Ho Chi Minh City including District 1, District 3, Binh Thanh and Phu Nhuan Districts. This exhibition will be operated in other secondary schools in other districts in next school year. Please download the press release here, and see more photos of the Nature Discovering trip of the volunteers at Cat Tien National Park here.