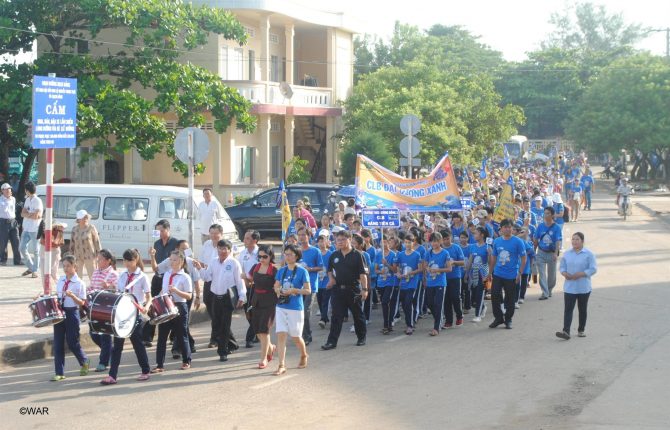 The festival aims to raise awareness and gain the attention of leaders, students and teachers, locals and tourists for the protection of Dugong and endangered marine creatures. The festival was organised by Wildlife At Risk (WAR), Phu Quoc Marine Protected Area and Phu Quoc District Department of Education and Training included two main activities: a parade and a play contest.  The main message of the festival is to “Take part in saving Dugong and endangered marine creatures”.Of the over 800 participants of the festival, roughly 300 children aged 12-15 years old are from six Marine Conservation Clubs of six secondary schools on Phu Quoc Island. The parade started at Phu Quoc Cultural House going through the town and passed by the Dinh Cau Temple – a famous tourist spot on Phu Quoc Island and finished back at the Cultural House. The parade was a successful and exciting event supported by the participation of locals and tourists alike.After the parade, all participants enjoyed a play contest inside the Phu Quoc Cultural House. The best plays by six of the Marine Conservation Clubs were performed during the contest. All of the plays were about conservation of Dugong and endangered marine creatures. Each play was carefully developed and well prepared by different clubs’ members. Key message regarding conservation of the Dugong and other endangered marine creatures was clearly conveyed to the audience through the intelligent and enthusiastic children and their bright vision about the future for marine life. The audience was profoundly affected by the play and inspired to take action to help Dugong protection.

First prize was awarded to the play entitled Dugong Diary developed and performed by Nang Tien Ca Club, Duong Dong 1 Secondary School. The play is about a journey of a mother and a baby Dugong from beautiful days to dark days when the two Dugongs faced numerous threats such as heading a board, eating nylon bags floating on sea grasses, being poured by dirty water… Peak of the play is a tragedy when the mother Dugong was caught by two fishmen. Although, the play has a happy ending which the mother Dugong is released back to the sea and she is reunited with her baby Dugong again, the play makes the audiences worry for Dugong’s fate in reality and inspires them to do something for Dugong. Other plays were also awarded with one second, one third and threes runner up prizes. The plays will be performed to other audiences on other occasions and will be shared broadly in the future.At the festival, songs and dances were also performed by the six secondary schools. All participants also show their commitment to Dugong conservation by pledging on saving Dugong on a big Dugong display. “The festival was strongly supported through participation by leaders from different bodies, students, teachers and the public. Through this event we expect that Dugong enforcement activities will be strengthened and everyone will take action towards conservation of the Dugong and other endangered marine creatures”, said Mr. Nguyen Vu Khoi, WAR’s CEO. Please download the first press release here, more pictures here