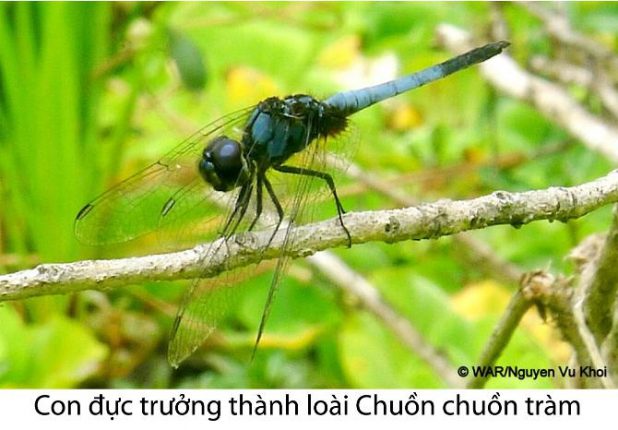 Ho Chi Minh City, 19 April 2011 – A new dragonfly species was discovered the first time in Vietnam by the Wildlife At Risk (WAR), the Aethriamanta aethra. This species does not have an English name while it is named in Vietnamese as “Chuồn chuồn tràm”. Aethriamanta aethra was recorded during WAR’s survey in U Minh Thuong National Park in March 2011.

Previously, this dragonfly was recorded in other countries such as Thailand, Singapore and Malaysia. This species has different colours depending on its age and gender. The adult male is blue purple and black while the female is yellow and black. The young female is light yellow and will turn into the blue purple when it matures. This dragon species was found in wetland habitats of U Minh Thuong National Park.

The survey and thus the discovery was conducted by Do Manh Cuong (Dragon conservation specialist of the IUCN in Vietnam) and Bui Huu Manh (Biologist from WAR), under the support of U Minh Thuong National Park.

The discovery of this species implies that more dragon species in the Southern wetland might not be discovered yet. WAR plans to conduct further surveys on the distribution of this species in the Southern wetlands, as well as a comprehensive survey on dragonfly species of U Minh Thuong National Park. Results of these surveys help conservationists to initiate appropriate strategy for wetland biodiversity conservation in general and dragonfly conservation in specific.