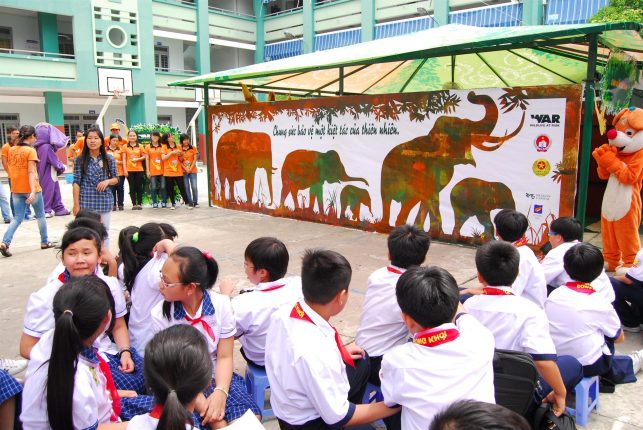 At the Ceremony, the SOS Programme for school year 2013-2014 was revealed. Beside the SOS Travelling Exhibition launched in December 2011, the SOS Programme includes two new components these are visiting Cu Chi Wildlife Rescue Station (WRS) and integrating wildlife education into the official curriculum of Biology for Grade 7. At the Ceremony, participants were excited by a play titled “What do you know about elephants?” performed by SOS volunteer students. The Head of the Dong Nai Nature and Culture Reserve’s FPD shared his practical experience of the Asian Elephant which informed all participants about the critical situation of the Asian Elephant in Vietnam. After that, all participants worked together to complete the last wall of the SOS Tent and got it ready for this school year. An impressive and colorful painting of wild Asian Elephants measuring 14m2 was painted on the last tent’s wall. By taking part in completing the painting on the SOS wall, all participants committed to “Say NO to illegal wildlife products” and “Take part in protecting a natural masterpiece, the Asian Elephant”.Before leaving the Ceremony, all participants visited the SOS Travelling exhibition with the new painted wall. According to Mr. Nguyen HoaiChuong, Vice Director of HCMC DOET, “The SOS Travelling Exhibition launched at the end of 2011 has received numerous positive feedbacks from secondary school students and teachers in HCMC.Due to such an effective and meaningful impact the,HCMC DOET committedto carry on their collaboration and supportfor WARandHCMC FPD to carry out two more activities including visitingCu ChiWRSandintegrating wildlife education into Biology of grade 7; the aim of which is to strengthen educational activities for students in saving wildlifefromillegalconsumption.” Mr. Nguyen Vu Khoi, WAR’s CEOexpressed that “WAR recently has co-operated with different functional bodies to deal with numerous wildlife crime cases which were reported by both students and local people. This fact proves that educating children in the SOS Programme is the right approach in order to mitigate illegal wildlife product consumption. WAR is looking forward to further attention and stronger cooperationamongstagencies and local peoplein educatingthe younger generation on wildlife protection, as well as preventingand confiscatingwildlife in crime cases.” In this school year, it is expected that approximately 30,000 secondary school students aged 12-15 years old will enjoy the SOS Travelling Tent, about 1,000 secondary school students and teachers from Tan Phu, Tan Binh, Binh Tan and Go Vap Districts will visit Cu Chi WRS and all grade 7 children of BinhThanh District will learn more about wildlife in their official curriculum.

Please see some photos of the Ceremony here, and full press release here.