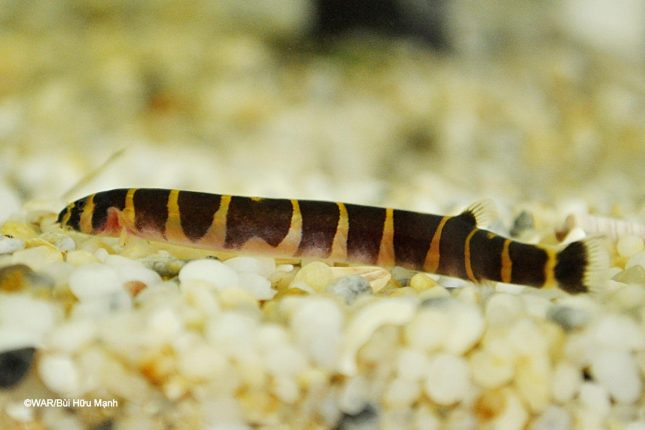 Wildlife At Risk (WAR) announces 12 new species of fresh water fish for Vietnam. These species were recorded during WAR’s surveys in Phu Quoc Island since the end of 2008. Some of these species are very common on the island.

Some species have been recorded in Vietnam previously but under different/invalid names such as Betta prima has been recorded as Betta pugnax (invalid name), Danio pulcher has been known as Brachydanio albolineatus (synonym). Some species were expected to exist in Vietnam by foreign ichthyologists, such as Trigonostigma espei and Lepidocephalichthys furcatus, now have been confirmed. A few species only have been known in Indonesia, Malaysia areas such as Barbuccacf. diabolica, now also have been recorded for Vietnam. For species with temporary identifications, there could be new species for science.
Identification work is still in the beginning phase. Modifications, additional records are anticipated.

“These findings have shown that there is a high potential for more species to be discovered in Vietnam,” said Mr. Manh Huu Bui, Senior Conservation Officer – WAR.

Quantity of many non-economic fish species are declining steadily due to habitat lost and water pollution. These species play an important role in balancing the ecosystems. The discovery of these species helps to monitor changes in the populations and based on that to implement appropriate conservation solutions. In the coming time, WAR will continue the fresh water fish programme including fish surveys, and breeding and releasing native fish to the wild.